Cat names from movies offer you a wide variety of name choices for your feline pet. You can read about the cat characters to help you decide if the name is the best choice for your furry buddy.

You may have a favorite movie that features a cat character that you wish to consider for your kitty. You can easily compare the personality traits of each character to those of your cat to determine if the name is a good fit.

The cat, Goose, appears in the 2019 Disney movie, Captain Marvel. Portrayed by four cats and one animatronic cat, it turns out that the character Goose is actually an alien species known as Flerken. Goose has octopus-like tentacles that emerge from its mouth to swallow large objects, including humans. Taken from the comic series, Goose was originally adopted by Carol Danvers, who thought the cat she named Chewy was an average alley cat. Known as Goose in Guardians of the Galaxy, the cat is outed by Rocket. Goose is a female, but the cats that portray Goose are all male with the main cat actor being a cool cat known as Reggie.

Name Of Cat in Alien

In the epic space SciFi film, Alien, Jonesy is the name of the space cat that heroine, Ellen Ripley, adopts. The orange tabby cat provides Ripley with that needed cat comfort for her long space sleep at the end of the movie.

The DC comics character, Catwoman, has a real name, Selina Kyle. Catwoman is featured in many of the Batman stories as well as the Dark Knight trilogy.

In the film, Coraline, the black cat is named Charlie. The cat is Coraline's mentor and serves as a guide, helping her through the journey she's undertaken.

In the TV sitcom, New Girl, Winston's cat, Furguson Michael Jordan Bishop dies. After the memorial, Winston finds a cat inside the bar. He adopts and names the feline, NAFTA.

In the movie, Meet The Fockers, Jinx is the in-law's cat that main character Greg loses. Greg replaces Jinx with a stray and paints the cat's tail to resemble the real missing Jinx. The real Jinx is later found. The two cat actors are a pair of Himalayan cats named Bailey and Misha.

The Pet Sematary cat is Church and was named after Winston Churchill. In the 2019 remake, the real-life feline that played Church, the spooky undead cat, was named Leo, a rescue cat that died shortly after the filming.

In the 2016 comedy animated (computer) film, The Secret Life Of Pets, the obese cat is named Chloe. A gray tabby, Chloe is the neighbor's lazy and very sarcastic cat that suffers from an eating disorder.

The cat in the Shrek franchise is Puss in Boots. Antonio Banderas is the voice actor for the animated character featured in Shrek 2, Shrek the Third, and Shrek Forever After.

The cat in the movie Hocus Pocus is named Binx. The cat is a 3-D cat head designed by a computer program. In the movie, the witch, Winifred, turned Thackery Binx into an immortal black cat.

The only cats in the Star Wars saga are Loth-cats that are small felines are found on the Outer Rim planet of Lothals. The Loth-cats enjoy living in the grassy plains. If you wish to give your special feline a Star Wars name, you may prefer one of the popular Star Wars characters.

Lord of the Rings Cat Names

While there were no cat characters in the Lord of the Rings film series, there are plenty of characters. You may decide to name your feline buddy one of the character names from these epic films. 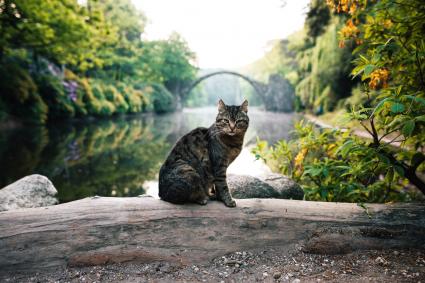 There are a handful of Marvel Comics cat characters. Not all of these characters are felines. Some take on the personas of a cat as part of their character's role in the comic series and movies.

You can find many superhero names for your cat. Many movie and TV superheroes first appeared in comics.

Are you InTheKnow?
Sign up for our newsletter featuring all the latest stories and products we love.

A few grey cats feature in movies may inspire you when searching for the perfect cat name. You can choose from several famous grey cat movie characters.

Orange cats featured in movies give you a few more cat name choices. You may find one that the cat's personality in the film matches that of your furry bud.

Black cats often appear in movies, but remain nameless creatures that haunt the characters. However, there are a few movies that feature the black cats as characters for a great resource of possible names for your feline friend.

What Are Disney Cats Names?

Disney animated movies feature several cats that you may find as cute or funny versions of your pet cat. You may see specific traits of your feline friend in some of these loveable yet very strong fictional characters.

You may decide your cat is truly a princess and deserves the royal treatment. Disney offers you several princess names that may be perfect for your furball pal.

Many of the cartoons played in theaters and TV feature comical and lovable cat characters. You may enjoy the older animated cartoons, such as Merrie Melodies and Looney Tunes and various modern animation movies. You might discover they present some excellent choices for your kitty's name.

Cats is an Andrew Lloyd Webber sing-through musical based on TS Eliot poems. Originally performed on Broadway, the musical was transformed into a movie in 2019. You can find some very unique and fun names by reviewing the cat character names.

Wealth of Cat Names From Movies

You have a wealth of possibilities for cat names when you peruse the variety of monikers given to cat character in movies. Whether these are animated, cartoons, films, or a musical film, you are sure to find one name that fits your amazing cat buddy.

Trending on LoveToKnow
Black Cat Personality Traits
It's common among cat lovers to hear opinions about the personality of cats with certain coat colors. Black cats often get a bad rap because they're considered unlucky with aloof, mysterious person
Keep Reading
170 Gray Cat Names That Are Anything but Basic
Gray cats range in shades from deep steely tones to silvery shimmers, depending on the breed and coat. Finding names for gray cats can come from many sources of inspiration related to this color wi
Keep Reading
101 Famous Literary Cat Names (Find a Masterpiece)
Famous cat names in literature can provide you with inspiration. The creative minds of authors present you with a wealth of famous cat names that you can also read about in various forms of literat
Keep Reading
197 Orange Cat Names as Cute & Clever as Your Feline
Orange cats are prized for their outgoing personalities and lovely coloring. When looking for orange cat names, you can find great options based on their shades, personalities, or words that mean "
Keep Reading
130+ Tabby Cat Names From Timeless to Unique
If you need some inspiration to choose the perfect tabby cat name for your tiger kitty, this list will help. Get ideas to name your cat from their pattern, color, or sweet personality. From classic
Keep Reading
127 Pagan Cat Names
Cats have long been associated with witches, the supernatural, and even gods and goddesses in Ancient Egypt. It's natural then to consider a pagan name for your kitty. See if any of these pagan cat
Keep Reading
59 Egyptian Siamese Cat Names
If you have a new Siamese kitty, Egyptian cat names may top your list of potential monikers. These dignified and unique names work well for exotic-looking male or female cats, and there's definitel
Keep Reading
189+ Creative Names for Black Cats
Infamous for their magical connections and not so magical reputations, black cats have grown into a beloved choice for cat lovers. However, the most common black cat names are often rudimentary or
Keep Reading
© 2023 LoveToKnow Media. All rights reserved.
Are you InTheKnow?
Sign up for our newsletter featuring all the latest stories and products we love.
160+ Cat Names From Movies for Every Pet Personality